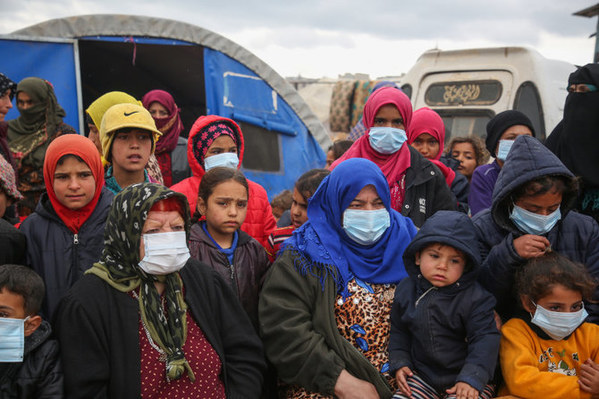 Our founder Laura Petrache about the situation of refugees and Corona virus on Arab News.
“A number of European governments have (used the crisis as justification) to close their doors,” Laura Petrache said, adding that refugees and migrants should not be stigmatized as more likely than other groups to be coronavirus carriers.

It is very important not to stigmatize refugees as being more likely than any other group to carry the virus, as a number of European governments have done as a justification to close their doors to migrants.

COVID-19 is not more likely to be among refugees than any other group, but the problem is that where refugees tend to be living, whether in camps or in cities, they tend to have worse sanitation conditions than elsewhere.

We need to be realistic: It would be impossible to contain an outbreak in such camp settings.

For example in Moria camp on the Greek island of Lesbos, 26,000 migrants seek out a desperate existence in a facility built for just 2,800. The paths are strewn with garbage and sewage pipes burst often. Residents line up for hours for a chance to shower, and even then, there’s no hot water.

According to an article of the New Humanitarian, the Democratic Republic of Congo, Burkina Faso, and Bangladesh all recorded their first coronavirus cases this week – part of a global outbreak that reached more than 100 countries and sickened some 120,000 people by 11 March.

Concerns have grown so severe that Doctors Without Borders called Thursday for Moria and others on the Greek islands to be evacuated immediately. Fears about the situation have surged in recent days since the first case of the coronavirus was confirmed on Lesbos.

Treating Covid in camps is difficult, but getting refugees out of a camp and treating at health facilities is almost impossible in many countries. If they do have cases in camps, they would need protective equipment for health workers, and training on basic isolation care.  Also, medical oxygen as the provision of basic oxygen can save a lot of lives.

To answer corona virus questions properly, governments should urgently apply “the right to accommodation” as well as “the right to decent material living conditions”. This must be done by opening up several unconditional places of accommodation, by setting up food distribution sites in sufficient numbers to limit groups of too many people, the opening of specific devices required in the case of the protection of isolated under 18 persons and the deployment of numerous access points to water, masks and soap. In addition, all this must be accompanied by information adapted to this type of population (targeting the native language and English)

It would be incredibly difficult to control an outbreak among nearly a million newly displaced people in overcrowded conditions. The scale of the challenge is huge. The Syrian crisis alone has created about 5.5 million refugees living in nearby countries, and displaced another 6 million inside Syria, according to U.N. sources. Inevitably, the virus will get everywhere and governments should be prepared as good as possible.”

DUBAI: The fate of the world’s ever-increasing population of migrants and refugees hangs by a thread as countries worldwide take increasingly stringent measures to halt the spread of coronavirus.

As of March 23, there were no confirmed cases of coronavirus disease (COVID-19) among refugees in the Middle East and North Africa (MENA) region, according to the UN Refugee Agency (UNHCR).

While the news may be heartening, the stark fact is refugees, along with migrants and asylum seekers, are directly in the path of the coronavirus storm.

As people for whom basic protective measures such as maintaining “social distancing” and regular and thorough handwashing are a luxury, the threat posed by the pandemic cannot be overstated.

As governments seek to mitigate transmission of the deadly coronavirus, which has now infected more than 350,000 people worldwide, many countries are shutting their borders and limiting movement to stop the pandemic’s domino effect on all economic sectors.

Rula Amin, the UNHCR’s senior communication advisor and spokeswoman in Dubai, said refugees are especially vulnerable, with little resources at their disposal to avoid contracting the infection.

“Refugees, whether inside or outside camps, tend to live in crowded shelters, which poses a serious challenge to one of the basic preventive measures: Social distancing,” she told Arab News.

In the event of an outbreak, arranging for the isolation of patients would require additional resources, Amin said.

MENA is seen as particularly prone to a coronavirus epidemic, and for good reason. The conflict in Syria, the war against Daesh in Syria and Iraq, and ongoing fighting in Libya and Yemen mean millions of displaced people currently live in overcrowded shelters, get poor nutrition and lack good hygiene.

On Monday, Syria, a country ravaged by 10 years of war, reported its first coronavirus infection, while Gaza’s Hamas government announced its first two cases: Two Palestinians who had returned from a trip to Pakistan.

The UN has said an outbreak in Gaza, a coastal enclave under blockade since 2007, could be “disastrous” given the high poverty rate and weak health system.

Beyond the Middle East, infections have been reported in two other war-scarred countries with large IDP populations: Democratic Republic of Congo and Afghanistan.

“It will be impossible to contain an outbreak in camp settings. Treating COVID-19 in camps is difficult, but getting refugees out of a camp and treating them in health facilities is almost impossible in many countries,” Laura Petrache, senior adviser at the Paris-based Migrant Integration Lab told Arab News.

“If they do find cases in camps, they’d need protective equipment for health workers, training in basic isolation care and medical oxygen facilities. The provision of basic oxygen can save a lot of lives.”

Aid groups in Greece and other countries are worried about a dangerous deterioration in conditions in camps that house refugees and migrants.

The situation is no better in France, Spain and Italy, which have imposed lockdowns on their populations as a precaution against the spread of the virus.

EU member states have also shut their external borders, further adding to the stress and anxiety of large migrant and refugee populations.

“A number of European governments have (used the crisis as justification) to close their doors,” Petrache said, adding that refugees and migrants should not be stigmatized as more likely than other groups to be coronavirus carriers.

Her view is seconded by Amin, who said: “The virus isn’t sparing anybody. It isn’t discriminating against anyone, so everyone is in the danger zone.”

She added that the UNHCR is not only trying to reduce the likelihood of an outbreak; it is prepared to minimize the impact in the event of one occurring.

Amin said many refugees and IDPs are in “hot spots and conflict-ridden countries” whose health services are already weak or overstretched.

As such, they have less access to the basic hygiene products needed for protection from the virus.

As far as MENA is concerned, the challenges for refugees are “immense” given that most of them live in countries with struggling economies and weak public health systems, Amin said.

“Supporting refugees to protect themselves and take preventive measures is one way” to help contain the spread of the disease, she added.

“Urging the inclusion of refugees in all measures and national response plans is another critical element in ensuring the protection of refugees.”

The UNHCR has issued an urgent global appeal for $33 million to support its efforts to provide protection to vulnerable refugee and migrant populations.

Clearly, time is of the essence. Amin said an outbreak could prove devastating to a country such as Yemen, where basic necessities for prevention such as water for handwashing is a “scarce commodity.”

Likewise, she added, the consequences would be disastrous if an outbreak were to hit, for instance, Al-Shati refugee camp in the northern Gaza Strip, where almost 86,000 Palestinians live in close proximity to one another.

“Supporting host countries is crucial for making them capable of increasing and upgrading their health service capacities in order to serve refugees,” said Amin.

Under the circumstances, Petrache said, host countries hold the bulk of the responsibility for protecting refugee and migrant communities. “Governments should urgently apply ‘the right to accommodation’ as well as ‘the right to decent material living conditions’,” she added.

This would require opening restricted housing for refugees, setting up food distribution sites and points for water supplies, and preparing medical equipment for cases involving people under 18 years of age, Petrache said.

Amin said all possible assistance has already been extended to MENA countries in protecting vulnerable communities from an outbreak. The UNHCR has been working closely with host governments, including their health ministries, in addition to sister UN agencies and partner organizations, she added.

The goal is to ensure that refugees are included in all government measures, and that preventive measures are in place and within reach.

Everyone, including refugees and asylum seekers, should be able to access health facilities and services in “a non-discriminatory manner,” Amin said.

The UNHCR has launched a campaign to raise awareness among refugees of the risks of contracting COVID-19 and the steps they need to take while reporting cases.

Meanwhile, the refugee agency has been distributing soaps and hand sanitizers in camps that can be accessed, Amin said. The UN and aid organizations are no strangers to crises and disasters, but it is clear that the COVID-19 pandemic is a challenge of an altogether different order.

They must now protect the most vulnerable section of the world’s population from the ravages of a virus that has stressed the health systems of the mightiest industrial powers. By Jumana Khamis for Arab News