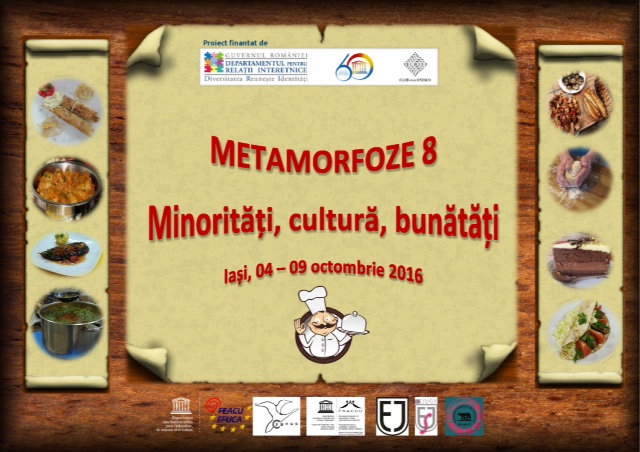 Posted at 18:34h in Akt As One by Yannick Le Guern

Alumnus Club for UNESCO and the Romanian National Commission for UNESCO organized with the financial support of the Department for Interethnic Relations of the Romanian Government, the eighth edition of the « Metamorphosis » project  with the theme « Minorities, Culture, Tasty treats ».

The event was held in Iasi, between 4 to 9 October 2016, and had the specific objective of encouraging cultural integration methods through activities conducted in a common space, through direct interaction between representatives of minority organizations in Romania.

There were a series of workshops where participants have prepared traditional dishes, from every minority present. Those dishes will be  included in a recipy cookbook to be publised online by the Cygnus publisher from Suceava.

The round tables, where specialists in the cultural area were invited,  had as theme the UNESCO view on minorities and current priorities overall this encounter, in a period when Romania celebrates 60 years since became a member of UNESCO. An exhibition with UNESCO documents was placed in the hotel lobby, where the project took place. A medallion – In memoriam Niculae Mircovici – was prepared by the  Bulgarian minority,  honoring the memory of the one who was until a few days ago the representative of the Bulgarian Union of Banat in Parliament.

Saturday night at the closing event, the dance ensemble of the Greek minority in Iasi, invited all participants to learn Greek dances at the Majestic restaurant where the whole project was carried out. The visits to museums in Iasi, along with other events, rounded up a complexe program based on strengthening mutual respect, cultivating pride to each identity as the sense of belonging to the culture of Romania and Europe.